Tianhe 1 is busy every day: Calculate 5 days of haze forecast in 2-3 hours 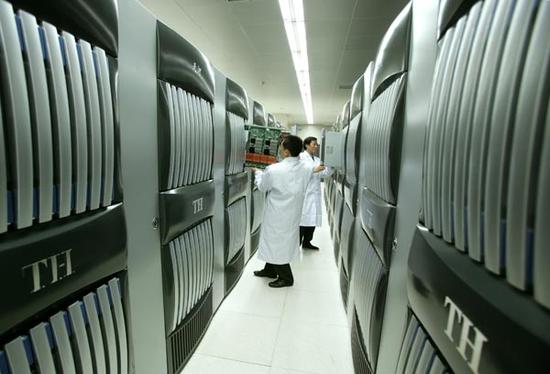 My name is Tianhe No.1. I was born in October 2010 and I live in the National Center for Supercomputing Tianjin. During the New Year these days, I can not be idle at all. I have more than 1400 online tasks each day, and I am in a saturated state of operation. This is a business scale that is difficult to achieve for countries in Europe and America. What I am busy every day, why is it so busy and busy meaning? Don't worry, listen to me one by one.

In the eyes of ordinary people, I only have 12 rows of black cabinets, but "people can't make appearances." I was China's first petaflop supercomputer, and it was once the fastest supercomputer in the world. The second 2570 trillion floating-point operations, the peak speed of 4700 trillion times. If it is converted into the computing speed of civilian computers, I will calculate for one hour, which is equivalent to the calculation of 1.3 billion people in the country for more than 340 years at the same time.

Many people know that I was in November 2010. On behalf of China, for the first time, I was the first person in the world's top 500 list of supercomputers, and I became a supercomputing person. The news made Liu Guangming, the director of the National Center for Supercomputing Tianjin, very excited. He still remembers the days in which people were previously subject to human control in the field of supercomputing. Countries such as Europe and the United States not only asked for prices, but also required their computers to be built separately and prevented from approaching Chinese people. In 2010, I not only topped the list, but also created a precedent for CPU and GPU efficient collaborative computing in the world (before all CPU computing). Not only did foreign countries not have the ability to block China, but they also sent experts to visit and study.

The state has invested 400 million yuan in funding and scientists have studied and fed me to eat food. The reason why they attach so much importance is because if there is a lack of autonomous supercomputing power, it will not be possible in the major basic areas of national economy and people's livelihood related to climate, weather, ocean and energy. Long-term meteorological forecasting and high resolution oil and gas exploration will be subject to long-term control.

In 2015, the United States launched the "National Strategic Computing Plan." Japan, the European Union, and Russia have also formulated supercomputing development plans. Supercomputing is the technological frontier that will be occupied by all countries in the world in the future, and it is also a veritable "national champion."

My ability is very great. As an all-rounder, "calculating the heavens," "counting the land," "counting people" are all my favorite shows.

"City of Heaven" is to let large planes and spacecraft fly in the virtual space I simulate, let meteorology and haze predict my future changes in my numerical time and space. Sounds abstract? Everyone imagines the size of the aircraft and spacecraft. It is clear that physical experiments are not feasible and the cost is too high. It is difficult to meet the demand for aircraft design through traditional experimental wind tunnels. Seventy percent of the R&D and design work of the US Boeing 787 passenger plane is completed by supercomputing wind tunnels and computer-aided design. The prototype is built directly into the test flight. Now, I have participated in important research work such as "full-scale flight aerodynamic simulation of domestic large aircrafts and spacecrafts".

Let's talk about haze warning. I cooperated with the China Meteorological Administration Institute of Meteorological Sciences and other units to construct an automated real-time fog haze warning and forecasting system. It only takes 2-3 hours to calculate the longest time-saving forecast for a 5-day numerical forecast and realize the highest grid for the current haze forecast. Accuracy 2-3 kilometers, while in the past, the accuracy is about 50 kilometers. Through the accurate analysis of pollution sources and regional pollution data, we provide early warning and solutions for future haze management. We must know that in the past these had to rely on foreign computers. Even if they did not consider the strategic significance of the country, they did not outperform me. The input cost was several times that of mine.

"Count" is able to do "CT" to Earth. In the past, in the field of oil and gas exploration, China lacked powerful supercomputers, and the core software needed to be purchased from several major oil and software giants in Europe and the United States. This made it completely uncompetitive in international oil exploration. Since 2011, I have cooperated with PetroChina Oriental Geophysics Exploration Institute to develop core software and processing platform with independent intellectual property rights and mature technology for petroleum seismic exploration data processing. The original business project that needs 30 days to complete is on my processing platform. It only takes 16 hours. This helped China's oil companies succeed in defeating European and American companies in international exploration bidding and completed a number of international and domestic projects.

"Manipulator" refers to exploring the secrets of the human brain and cracking the human genetic code. Brain science is the driving force for breakthroughs in many areas such as neurological disease treatment and artificial intelligence. In the field of whole brain three-dimensional imaging in China, based on my super-computing capabilities and parallel processing technology, we have achieved more than 150 times improvement. The original mouse brain brain imaging data processing takes 5-7 days, now it can be completed in 1-2 hours. At the same time, we also cooperated with neuroscientists to carry out the first combination of brain neural network simulation and supercomputing in China, which will lay a solid foundation for the next step in the development of brain science in China.

Now, every day, more than 60 scientists and professional engineers are protecting me. Everyday, I spend nearly 100,000 yuan to provide me with motivation. I am not busy. There are more than 1,400 concurrent online tasks each day. This means that more than 1,400 scientific and technological innovation research work each day rely on my superior capabilities. There is no second technology service in the world. The platform has such a large range of service capabilities and support for technological innovation.

My clients are also many. Currently, there are nearly 1300 users of scientific research, companies, and government agencies serving the country. The main users are in 30 provinces, autonomous regions and municipalities directly under the Central Government.

National science and technology innovation and the development of emerging industries can not be separated from me. In my supercomputing platform, there are more than 100 research teams engaged in computational simulation of new materials such as electronic information, nanometers, advanced composites, energy storage, superconductivity, and magnetism; Shanghai Institute of Materia Medica, Chinese Academy of Sciences uses my supercomputing platform. In combination with experiments, we have screened more than 200,000 representative compounds for anti-epileptic drugs. The Beijing Institute of Life Sciences relies on me to research new drugs that will replace bacterial infections in the future. I can say that I have become an important support platform for drug development in China. In the field of gene sequencing, the Tianjin Supercomputer Center cooperated with scientific research institutions such as BGI, and conducted large-scale gene analysis of humans, animals, and plants based on highly-efficient gene sequencing software, including genomic resequencing analysis and processing of 3,000 rice plants. 15 times faster...

As the world's first supercomputer to achieve balanced income and have a slight surplus, I not only provide simple computing services, but also help companies transform and upgrade, enhance research and development efficiency and market competitiveness. According to preliminary statistics, I have saved companies hundreds of millions of yuan in R&D investment and brought more than RMB 3 billion in related economic benefits to the company.

In recent years, Tianjin FAW has faced a new high-speed update of the Chinese market in the development process. Due to the lack of efficient design and R&D platforms, it is basically impossible to develop core products by self-reliance and gradually face difficulties. In the second half of 2014, they took advantage of the Tianhe Engineering Simulation Platform to shorten the research and development cycle of the new SUV vehicle's aerodynamics from the original 3-6 months to less than 10 days, and designed and produced the urban mini-SUV model. The main force of market sales.

This life is of great privilege and privilege to promote the development of the country's high-end information technology and support major technological innovation, industrial transformation, upgrading and innovation. Due to the rapid increase in demand, my current utilization rate has exceeded 90%, and the computing and data storage capabilities are already running at saturation. However, we do not have to worry about the fact that my younger brother Tianhe III will soon be born and its speed will be 200 times faster than mine. The implementation of the National Big Data Development Strategy, the â€œInternet Plusâ€ Action Plan, and the China-made 2025 major development plan urgently require the support of super-computing capabilities. Our family will raise their sleeves to work hard!