Li Yangdong: The torchbearer of the palace lanterns

"More than 700 years ago, a new battle between the Song and Yuan Dynasties took place in the Xinhui Yamen. This naval battle ended with the Song Dynasty. Later, the artists and priests in the Song Dynasty courts flowed in Jiangmen and Xinhui. From then on, they came from The palace lantern culture of the Central Plains, this traditional handicraft has been passed down to the present." Li Yangdong told reporters about the historical allusions of Jiangmen Palace lanterns. It is this long-standing traditional culture that deeply attracted Li Yangdong and made him return to his hometown from the United States to inherit this traditional craft.

Li Yangguang said that the folks in Jiangmen and Xinhui have been circulating this handicraft. Every festival, such as Lantern Festival and Mid-Autumn Festival, has a lot of lights. "In the reign of Emperor Guangxu of the Qing Dynasty (about 1880), Li Xiyu, a newcomer of Qibao, began selling handicrafts such as palace lanterns in Jiangmen, and opened lanterns at Jiangmen Changdi at the end of the 19th century. In 1925, Li Xi's son Li Fa inherited his ancestral career. At that time, a batch of batches of sunflower fans and palace lanterns were exported in Jiangmen."

â€œIn the late 1940s, Li Fa gradually moved his business to Hong Kong, and in 1951 he changed the factory into a manufacturer specializing in the production of classical palace lanterns and court ornaments. In the decades of Hong Kong, the Dongyi Palace lanterns were produced. Participated in the Hong Kong trade fair, won the championship award and many awards six times, and became famous."

"In 1989, the 73-year-old Li Fa moved the palace lantern factory that had been operating for dozens of years to Jiangmen, the hometown, to continue to produce classical palace lanterns. The traditional craftsmanship of Jiangmen Palace lanterns, after hundreds of years, still flourished. â€

Three years ago, Li Fa, who was nearly 90 years old, could not help himself. He found Li Yangdong, a fellow countryman, and hoped that he could inherit the traditional craft of Jiangmen Palace lanterns. "I am very touched by the old man's life all his energy on this traditional craft. Later, I took over the family of the elderly and contacted several like-minded young people. It is more than two years here."

Dilemma: How do traditional processes adapt to the needs of the modern market?

"In fact, the Chinese palace lanterns have a glorious history. During the Yongle Period of the Ming Dynasty, the Imperial Palace recruited Suzhou-Hangzhou artisans to enter the Beijing to manufacture lamps for the court. In the Qing Dynasty, the Palace House Office set up a light library, specializing in the manufacture and repair of palace lanterns and lanterns. During the year, the Chinese lanterns were also awarded at the Panama Expo. The hexagonal lanterns are a model among them. Look at the faucets of the top curved beams. The dragons are thick and heavy. The dragon mouth is sagged with silk spikes, and there are two layers of landscape paintings. With the hollow stripe pattern, it is a beautiful enjoyment."

Li Yangdong said that when he took over, the palace lanterns were facing a problem. On the one hand, since the 1990s, due to the rapid economic development, the domestic lantern market has shrunk severely; on the other hand, the lanterns are also facing problems such as rising raw material prices and low manual operation efficiency.

"Artwork can only be vital if it is accepted by the public." On the remote, barren hills of Du Fu Town, Li Yangdong is thinking about this problem. Li Yangdong told the reporter: "The traditional palace lanterns are made of wooden hexagons. They are divided into two sections, and the two sections are connected by chains. The upper section is named with a light cap (the court royal lamps have a light cap), and the next section is called a lamp body. It is divided into two layers, each with six light windows, each with a paste or mosaic glass, painted with lacquer, with landscapes, beasts, flowers, birds, figures and other materials. Its shape is dignified, stable, and ancient China. The architectural art complements each other.

And its materials are mostly made of red sandalwood, mahogany, rosewood, nanmu or combined with boxwood to change the shape of the teeth, made of high-quality wood, hand-polished, not only moisture-proof but also a kind of soft and natural luster, and long-lasting Look good.

However, following this process, it will be time-consuming and consumable, and it is difficult to compete in the market. Li Yangdong decided to follow the legendary process of Mr. Li Fa Lao and transform the palace lanterns with modern materials, such as changing the wood carving into a modern composite material, which can be folded and assembled. Using the bulb as the illumination source not only preserves the traditional charm of the lantern, but also increases its practicality.

Now, Li Yangdong has already retrieved old workers and designed more than 300 styles of palace lanterns. But how can Jiangmen citizens re-recognize and accept the lanterns? How to integrate palace lanterns with people's lives? This is a real problem.

â€œThe palace lanterns are the assembly body of painting, styling and glass crafts. We will hire better teachers to draw the works on Jiangmenâ€™s scenery and customs on the glass of the palace lanterns, making it more local, and with the celebration of the relevant departments of Jiangmen City. Festival activities, engage in palace lantern exhibitions, let the people of Qiaoxiang know history and know the hometown of overseas Chinese. Now we have decided to participate in the National Decoration Exhibition held in Guangzhou in July this year, in order to promote the products to the whole country, even the international city often said Revitalizing the Jiangmen Palace lanterns, Li Yangdong is full of confidence.

It is understood that the value and status quo of Jiangmen Dongyi Palace lanterns have attracted the attention of experts and professors such as Zhang Guoxiong, Mei Weiqiang and Gang Hu of Wuyi University and Jiangmen Overseas Chinese Research Association. With the help of relevant experts, Jiangmen Palace is currently working. The second batch of intangible cultural heritage in Jiangmen City was declared.

quick connection system including 2810 tool-less module and QCS block and terminal box. Module and box body material is PC and for back mounting frame is stainless steel. 2810 module have two types, one is single pair unit cap and another caps is 5 pair one unit. Contact IDC material is phosphor bronze with Tin plating. 2810 block can be exceed cat 5 standard transmission.

QCS blocks have 30-pairs, 50-pairs, 100-pairs three types to your choice. Tool-less wire design not need any other punch tools. Can be fast and easily finish the cable termination. Module both sides have two cable guide to management. 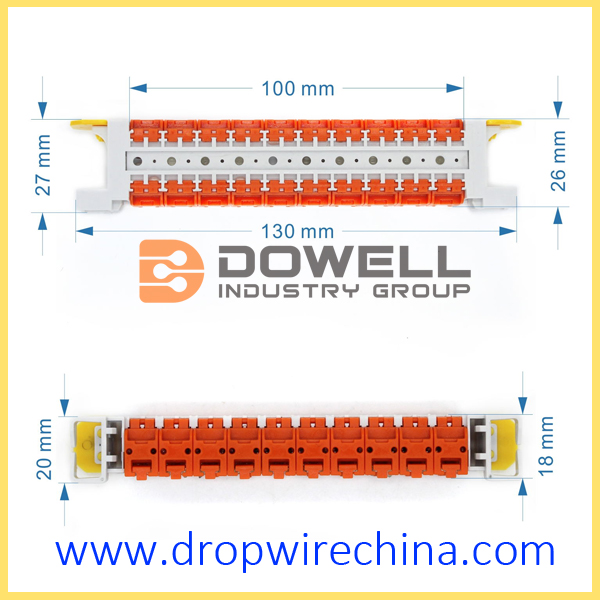