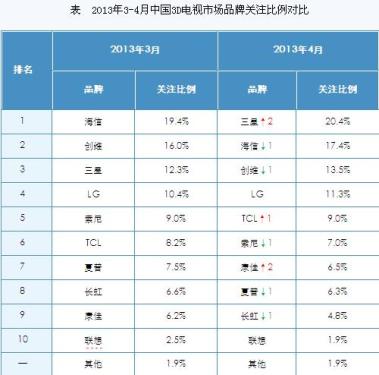 In April, the pattern of brand awareness in the Chinese 3D TV market changed significantly. This month, Samsung launched 3D TVs and added 15 new television products. This month, the proportion of attention of the Samsung brand has risen sharply, winning the attention of the brand. In terms of product structure, large-size 3D TVs continue to receive widespread attention from consumers, and the focus of the price segment has begun to shift to 5001-8,000 yuan.

â€¢ Brand focus: Samsung replaced Hisense to become the champion this month with a focus on 20.4%.

â€¢ Backlight structure: The percentage of attention of LED backlight type products is 98.7%.

â€¢ Price segment structure: The price segment of 5001-8,000 yuan this month is the most popular among consumers.

â€¢ Samsung replaced Hisense to become the champion of this month In April 2013, the brand awareness of the Chinese 3D TV market changed significantly. This month, Samsung replaced Hisense as the brand's attention champion. Concern has risen sharply, reaching 20.4%, up 8.1% from March. Hisense and Skyworth, respectively, were the only runner-ups and runner-ups this month. The ratios of concern were 17.4% and 13.5% respectively. Concerned about the proportion of more than 10.0% of the brand still LG, this month was 11.3%, up 0.9% from the previous month.

The rest of the brand's attention ratios are all below 10.0%, with little difference between each other. The market competition is fierce. Unlike March, TCL and Sonyâ€™s position were swapped this month, TCL rose to fifth place, and Sony fell to sixth place with concerns of 9.0% and 7.0% respectively. In addition, Konka rose to seventh place this month. At the same time, Sharp and Changhong dropped to eighth and ninth positions respectively.

Second, product attention to the pattern

It can be found that the top 10 products that concern the ratio belong to seven different brands, and their price distribution varies. The screen size is more than 40 inches. Among them, Samsung UA55ES8000's relatively highest price, reached 14,399 yuan, at the same time, Sharp LCD-60LX640A screen size is relatively the largest, reaching 60 inches.

According to ZDC data, the average screen size of 3D TVs this month is 46.81 inches, which is slightly higher than last month, and higher than the 39.80 inches of LCD TVs.

According to ZDC data, the number of products sold in China's 3D TV market this month was 695, an increase of 56 products over the previous month. The average market price reached 8,537 yuan, higher than the overall market.

Third, the analysis of mainstream manufacturers

(I) Brand trend analysis â€¢ Samsungâ€™s focus on the ratio rose first and then decreased in April 2013. In the 3D TV market in China, the Samsung brandâ€™s attention ratio fluctuates less and rises first and then falls. It can be seen from the figure that Samsungâ€™s The ratio of attention was 18.4% at the beginning of this month, and then it gradually increased. It reached the highest value of 22.4% on the 11th, and then the attention ratio began to decline. It finally stabilized at 19.1% at the end of the month, which was a 0.7% increase compared to the beginning of the month. Overall, this Samsung's trend is relatively stable.

Grid screen is a kind of screen which is composed of light bars. It is another name of light bar screen. Because its form is hollow type, net format, so people in the industry call it grid screen, hollow screen and so on. This kind of display screen is mainly used in outdoor walls, glass curtain walls, building tops, as well as outdoor anti-aircraft guns, sightseeing elevators, etc. 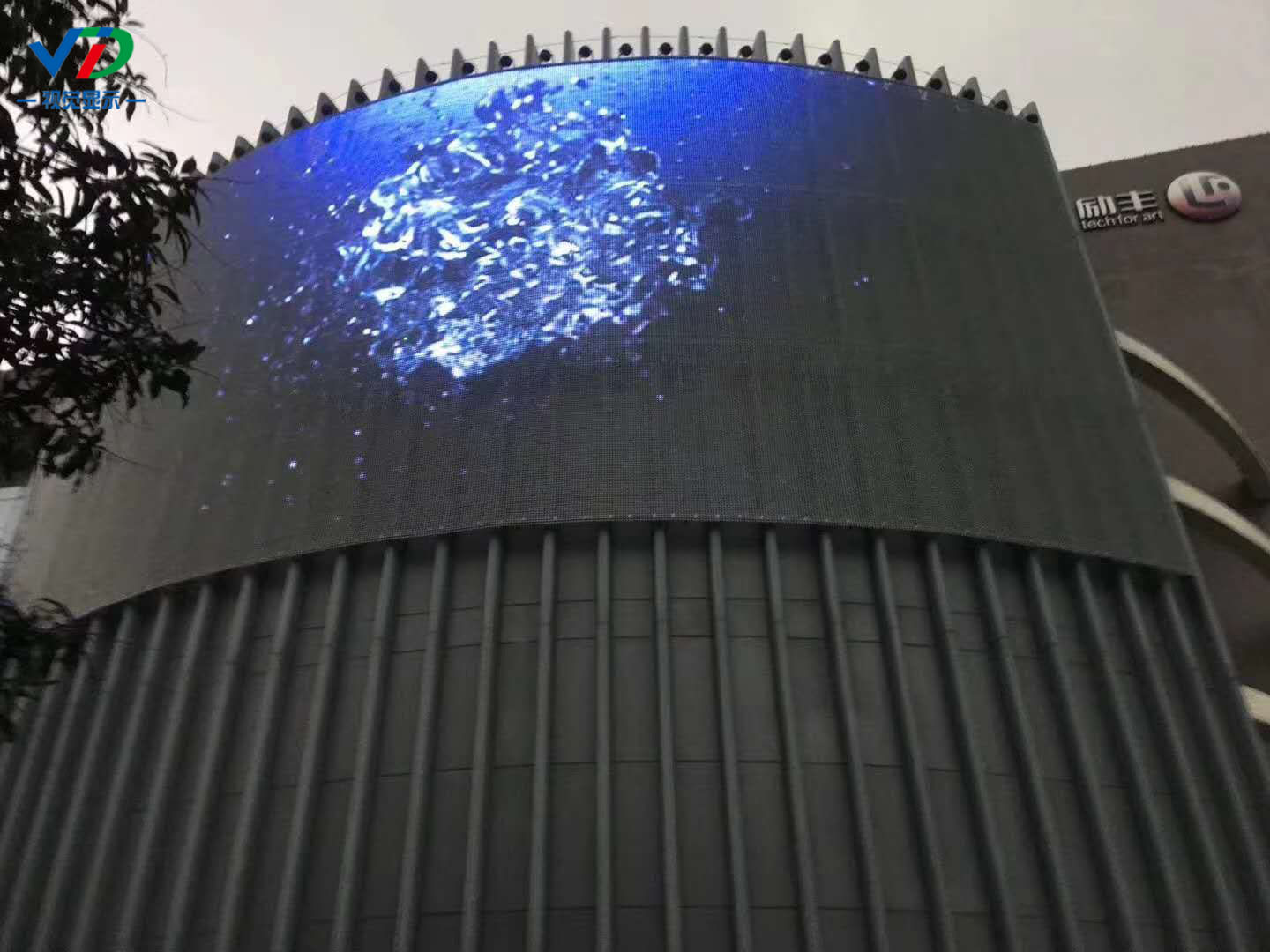 Due to the special structure of the product, different from the box type display screen, led grid screen has the following characteristics:

For the screen, light weight is our most intuitive experience. Because it is a screen grid, which enables the display to ventilate, so its wind load capacity is very strong. 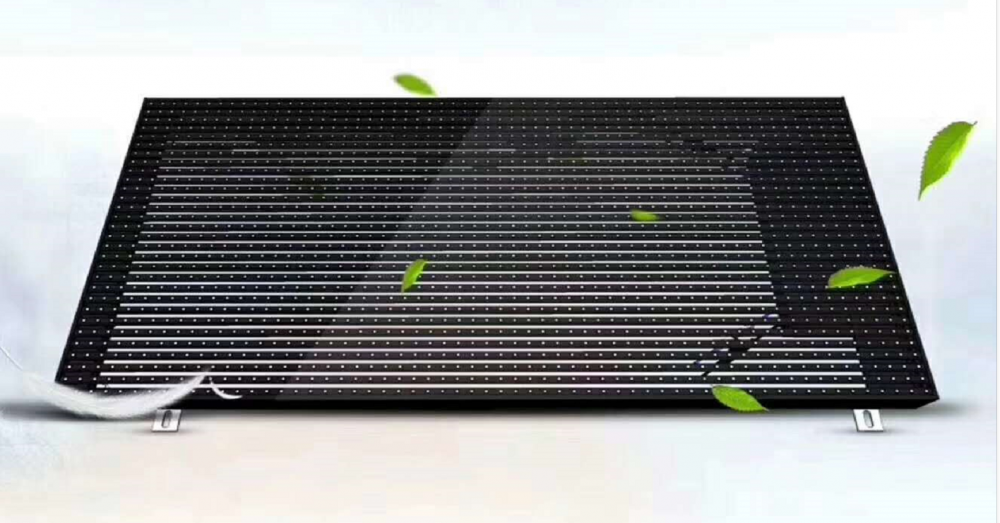 The grid screen has a high protection level of IP67, and the safety and stability of use are guaranteed.

No steel structure installation, no air conditioning, can be installed before or after. 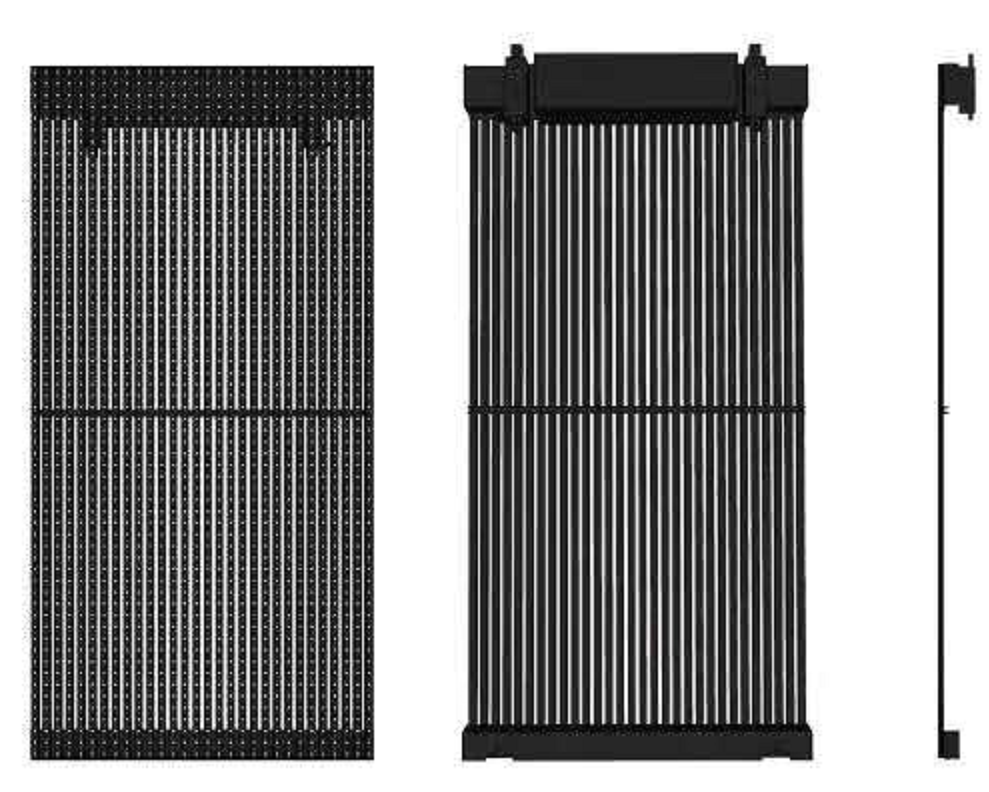